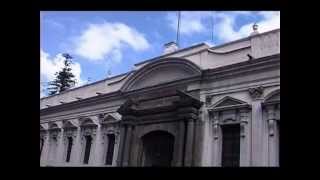 The Museum of the University of San Carlos, is a service unit of the General Directorate of University Extension, specialized in disseminating, educating, conserving, researching and exhibiting the culture, artistic historical heritage and scientific knowledge of the Alma Mater. The first building built for the University in Nueva Guatemala de la Asunción was designated for its operation upon its transfer in 1779, declared a National Monument for its historical and aesthetic value in 1970, and a Historic Monument of USAC in 1997, also known as “Antigua Facultad de Derecho” (former Law School).

The creation project was in charge of Licda. Edna Núñez de Rodas and it was approved on September 24, 1980, subsection 3.3.6.3 of Minutes No. 46-80 of the session held by the Higher University Council, in the Rector’s Office of Lic. Mario Dary Rivera. Time passed, and the rector Lic. Roderico Segura Trujillo promoted the restoration work on the building that had been severely damaged by the 1917,1918 and 1976 earthquakes.

During the administration of Dr. Alfonso Fuentes Soria, the budget allocation for the operation of the Museum was achieved and it was officially inaugurated on the night of June 22, 1994, under the coordination of Gladys Elizabeth Barrios Ambrocy who served for 24 years in MUSAC as Director. Three exhibition halls were opened since then: Historical Hall of the University, Hall of Cultures, Art Gallery and the Educational Program Hall with the purpose of preserving and disseminating the cultural values of the University and the country.

Throughout its 25 years of operation MUSAC has carried out more than 300 exhibitions, among the most notable:

“First Century of University Life”, “Majolica Ceramics”, “Contemporary University Treasures” and “Recovering What is ours”, with which opened the museum in 1994.

Since its opening, MUSAC has become a meeting place for people linked to art, science, history and culture in general, as well as a means of disseminating university work and promoting knowledge.

MUSAC’s 25 years are a reality today thanks to the support of artists, artisans, educators, students, university students, professionals, media, staff, volunteers, friends of the museum and its visitors who are the greatest motivation and future of the Museum! Long life to MUSAC!

The Museum of the University of San Carlos, is a service unit of the General Directorate of University Extension, specialized in disseminating, educating, conserving, researching and exhibiting the culture, artistic historical heritage and scientific knowledge of the Alma Mater.

Today At The Museum